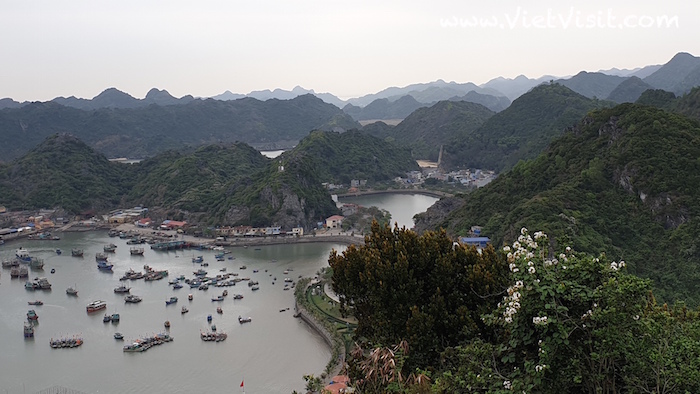 From Wikipedia, the free encyclopedia

Cat Ba is the largest of the 367 islands spanning 260 km2 (100 sq mi) that comprise the Cat Ba Archipelago, which makes up the southeastern edge of Ha Long Bay in Northern Vietnam. Cat Ba island has a surface area of 285 km2 (110 sq mi) and maintains the dramatic and rugged features of Ha Long Bay. It is commonly used as an overnight hotel stop on tours to Ha Long Bay run by travel agents from Hanoi. This island belongs to Haiphong city – the most famous city of industry in Vietnam. 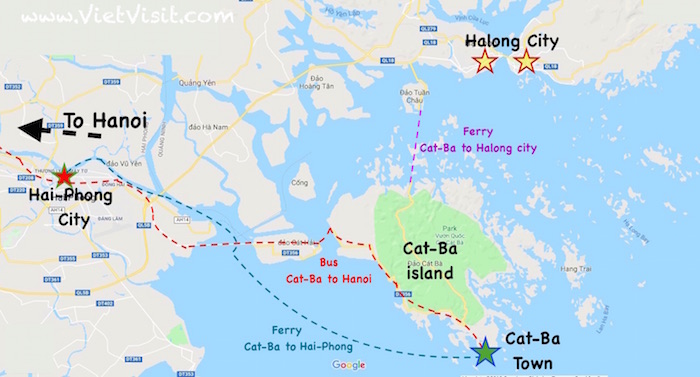 Cat Ba is the largest island in the Bay and approximately half of its area is covered by a National Park, which is home to the highly endangered Cat Ba langur. The island has a wide variety of natural ecosystems, both marine and terrestrial, leading to incredibly high rates of biodiversity. Types of natural habitats found on Cat Ba Archipelago include limestone karsts, tropical limestone forests, coral reefs, mangrove and sea grass beds, lagoons, beaches, caves, and willow swamp forests. Cat Ba Island is one of the only populated islands in Ha Long Bay, with roughly 13,000 inhabitants living in six different communes, and 4,000 more inhabitants living on floating fishing villages off the coast. The large majority of the population can be found in Cat Ba town, which is located at the southern tip of the Island (15 km (9 mi) south of the national park) and is the commercial center on the Island. Since 1997, Cat Ba town has grown rapidly and has become a tourist hub for both the Island and greater Ha Long Bay. Especially, almost all surface of this island is deployed free wifi access points as well as 3.75 generation mobile networks, which can make visitors can easily work when traveling.

Cat Ba Island means “Women’s Island” (Cat meaning sandy and Ba meaning women). Legend has it that many centuries ago, three women of the Tran Dynasty were killed and their bodies floated all the way to Cat Ba Island. Each body washed up on a different beach and all three were found by local fishermen. The residents of Cat Ba built a temple for each woman, and the Island soon became known as Cat Ba. Archeological evidence suggests that people have lived on Cat Ba Island for almost 6,000 years, with the earliest settlements being found on the southeastern tip of the Island close to the area where Ban Beo harbor sits today. In 1938, a group of French archeologists discovered human remains belonging “to the Cai Beo people of the Ha Long culture, which lived between 4,000 and 6,500 years ago… considered to be perhaps the first population group occupying the North-Eastern territorial waters of Vietnam… [and] the Cai Beo people may be an intermediary link between the population strata at the end of the Neolithic Age, some 4,000 years ago”.

In more recent history, Cat Ba Island was inhabited mostly by Viet-Chinese fisherman and was largely influenced by both the French and American wars. The Island was a strategic look-out point and bombing during the wars often forced local residents to hide among the Island’s many caves. Today, the best reminders of the two wars have been turned into tourist attractions. Hospital Cave, which was a secret, bomb-proof hospital during the American War and as a safe house for VC leaders. This three-story feat of engineering was in use until 1975 is only 10 km north of Cat Ba town. The second attraction, the newly built Cannon Fort, sits on a peak 177 meters high, offering visitors a chance to see old bunkers and helicopter landing stations as well stunning views Cat Ba Island, its coast, and the limestone karsts in Lan Ha Bay offshore.

Today, Increases in infrastructure on the Island (including the building of bigger roads, dams to build harbors and to protect Cat Ba town from flooding, consistent electricity being brought to the island (which surprisingly happened as late as 1997) instead of having to rely on a generator, and large ferries and barges, able to transport trucks and cars to the Island from the mainland making daily trips to Cat Ba) made it easier for tourists to visit the Island, leading to a rapid increase in tourism and development in Cat Ba town starting in 2001. Since then, a stop on Cat Ba Island has been included in the itinerary of many Ha Long Bay cruises and a strip of tall, thin, five story budget hotels line the seafront, receiving more than 350,000 visitors a year. Currently, over 105 hotels are listed in Cat Ba Island’s tourist directory pamphlet, from cheap budget hotels to flashier upscale resorts, and construction is underway on many more. Right now, construction is under way on the colossal Cat Ba Amatina, an enormous project that will transform the southern coast of the island. The Amatina compound will be “a world-class integrated marina, casino, resort and theme park” spanning 171.57 hectacres and (VITC) will be able to host almost 6,000 residents at a time. The Amatina will boast “seven resorts with over 800 villas, three marinas, one international convention palace, 6 five star hotels and 1 four star hotel” (VITC). The scale of this project is gigantic and will basically create a luxurious mini-city on Cat Ba and will attract tourists from around the world. Cat Ba Island has become the adventure-tourism capital of Vietnam, and many of the activities advertised are nature-based. Visitors can kayak and take boat cruises through Ha Long Bay and the Cat Ba Archipelago, hike through the national park, mountain bike around the Island, spend time on Monkey Island just offshore, tourist can stay at Monkey Island Resort for real relax time on private beach, explore the Island’s many caves, swim on Cat Co 1, 2, or 3 (three sandy beaches a short walk from Cat Ba town), or even rock climb on the limestone karsts. With its stunning scenery, its association with Ha Long Bay, its proximity to highly populous cities like Haiphong (50 km) and Hanoi (150 km), and even China (many regional visitors come to the Island in the summer, the busy season, to avoid the heat and pollution in the cities), and plenty to do, Cat Ba Island has become a major travel destination for foreign and Vietnamese visitors alike.

At the heart of Cat Ba Island lies a visually stunning and ecologically diverse national park. In 1986, 9,800 [98 km²] hectares (approximately one third of the Island’s total land mass) was annexed as Cat Ba National Park, the first decreed protected area in Vietnam to include a marine component (Dawkins 14). It had previously been the site of a timber company. In 2006, the boundaries of the national park were redefined, so the park contained 109 km² of land area and an additional 52 km² of inshore waters and mangrove covered tidal zones (langur website). The park is staffed by 92 people, including over 60 park rangers. In 2004, Cat Ba Archipelago was declared a UNESCO Man and Biosphere Reserve Area in order to protect the multiple terrestrial and aquatic ecosystems as well the diverse plant and animal life that is found on the Island. The UNESCO designation divides the archipelago into three distinct areas, each with certain functions and restrictions that regulates development and conservation measures on the Island:

The core area needs to be legally established and is not subject to human activity, except research and monitoring, and as the case may be, to traditional extractive uses by local communities. Cat Ba National Park more or less constitutes the core zone of the Cat Ba Archipelago Biosphere Reserve. (8,500 hectares, of which 2,000 are marine)

The buffer zone must surround or be contiguous to the core area. Activities are organized here so that they do not hinder the conservation objectives of the core area but rather help to protect it. It can be an area for experimental research and it may accommodate education, tourism, and recreational facilities. (7,741 hectares, of which 2,800 are marine)

To provide support for research, monitoring, education, and information exchange related to local, national, and global issues of conservation and development. (10,000 hectares, of which 4,400 are marine)

Goals of the National Park

The first purpose is conservation, and the park is primarily committed to protecting the nature and wildlife in the archipelago. The second purpose is scientific research, and the third purpose is to promote eco-tourism and environmental education. A third priority is to increase the economic development of the small communities living in the buffer zones of the national park through eco-tourism and conservation programs, that balance both conservation and economic goals.

The Cat Ba langur (Trachypithecus poliocephalus), or golden-headed langur, is endemic to Cat Ba Island and is one of the most endangered primates in the world. The langurs population numbers, which used to be between 2,400-2,700, dwindled to as low as only 53 langurs in 2000 due to poaching for traditional medicine and habitat fragmentation caused by human development. Today, there are approximately 68 langurs left in the wild. The langur population and its habitat is monitored by the Cat Ba Langur Conservation Project (CBLCP), a German-based NGO that works in close cooperation with the national park staff and the local governments on Cat Ba Island and in Hai Phong province, especially the Department of Agriculture and Rural Development in Hai Phong, to protect the langur, its habitat, and to help conserve the biodiversity and environmental integrity of the entire Cat Ba Archipelago. difficulties the project has faced in the past and will face going forward. The CBLCP is an in situ conservation project, meaning the project works to protect both the animal and its habitat (there are no plans to put the langurs in zoos). This means that by taking efforts to preserve the langurs, the CBLCP, by protecting the natural environment of the archipelago, really works to preserve all the species found on the archipelago and to protect the overall health of the forest. The biggest reason for the steep decline in langur population numbers was illegal poaching and trapping of the langurs for traditional medicinal purposes. This is a difficult trend to reverse, as the langur was being poached by local people who relied on the forest for subsistence and sold langurs to support their meager income, and from poachers outside the Island who are part of the international illegal wildlife trade. Another major threat facing the langurs is habitat fractionalization, due to increases in human development. Currently the langur population is fragmented into seven isolated sub-populations at five different locations on Cat Ba Island, with most of the langur groups being very small in number with some populations longer functional in terms of reproduction (only three groups are currently reproducing). The fragmentation of the langur population reduces genetic variability, which is already a major problem due to the minute population numbers, and makes it impossible for some groups of langurs to reproduce and replace aging group members. To fight this problem, the CBLCP focused their efforts on two approaches: increasing education and awareness levels about the decline of the langur population and other conservation issues and creating a protection network that relies on the local population. These two approaches both take great effort and care to engage the residents of Cat Ba Island, which makes the programs more effective. The CBLCP also takes an active approach in raising levels of environmental awareness and education on Cat Ba Island; they also strive to create a connection between the citizens of Cat Ba Island and the natural environment. Other mammals in the Park include civet cats and oriental giant squirrels.

The best experience ever. Would recommended it to everyone. We got married in Haiphong, and stayed at Catba Island Resort & Spa, and it was a dream come true.

from Please call for pricing

This site is registered on wpml.org as a development site.